Avenging Angela and Other Uncanny Encounters by Jonathan Thomas 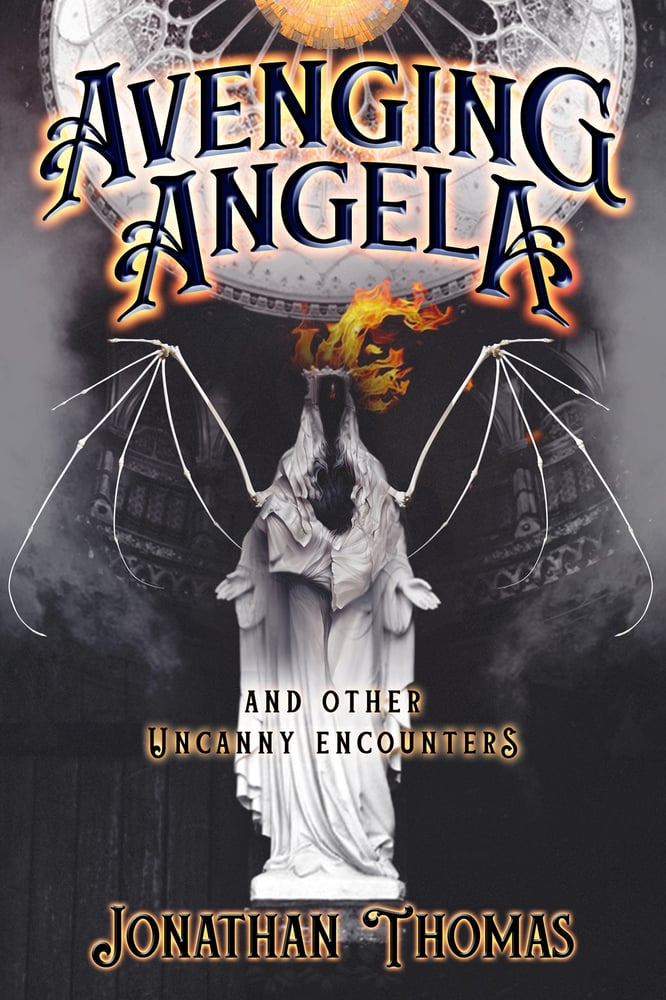 Available to be signed/inscribed by cover designer Dan Sauer. Please specify how you'd like it to be signed in the comments section of the order form.

Jonathan Thomas, with his vibrant prose, his keen eye for human foibles, and his ability to generate an atmosphere of grisly terror, can take his place as a leading weird writer of this century. This sixth collection of his weird stories contains a wealth of narratives, long and short, that have made him one of the most acclaimed writers of supernatural fiction in the past two decades.

Thomas excels in the elaboration of themes and motifs found in the work of H. P. Lovecraft, and in this volume such tales as “The Once and Future Waite,” “A Box from Blackstone,” and “Avenging Angela” extrapolate upon both Lovecraft’s stories and Lovecraft himself as a complex and enigmatic figure. Several are set in Lovecraft’s hometown of Providence, R.I.

Thomas’s skill in the evocation of terrors from the remote past—whether it be the Neolithic age or the era of Romans and Celts—is exemplified in “The Shaman’s Smile,” “Nos Morituri,” “Flouting Pascal,” “After the Legions,” and “Grave Days in Skara Brae.” But Thomas doesn’t hesitate to infuse weirdness in contemporary everyday life, as in “The Uncanny Comeback of E” and “One Across.” The fusion of the ancient and the modern is at the heart of “Widow’s Walk,” “A Dip in the Bog,” “Lead On, Vergil,” and “The Muybridge Cocktail.”

The Shaman’s Smile
The Once and Future Waite
Widow’s Walk
The Uncanny Comeback of E
Nos Morituri
A Dip in the Bog
Lead On, Vergil
The Muybridge Cocktail
A Box from Blackstone
Flouting Pascal: An Episode from the Latest Dark Ages
After the Legions
One Across
Grave Days in Skara Brae
Avenging Angela