What the Daemon Said: Essays on Horror Fiction, Film, and Philosophy by Matt Cardin 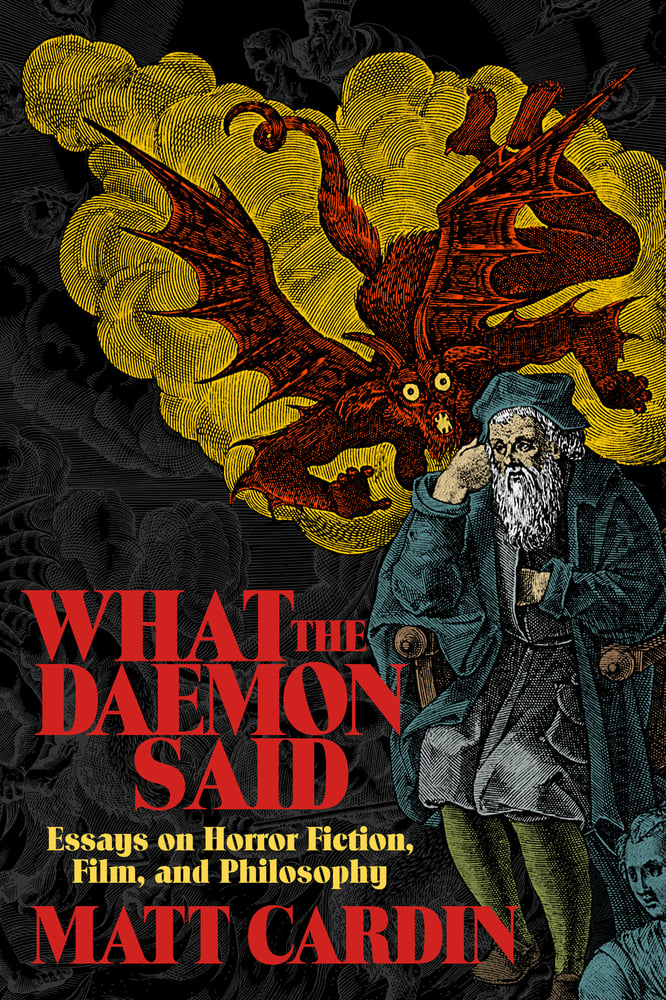 Available to be signed/inscribed by artist/cover designer Dan Sauer. Please specify how you'd like it to be signed in the comments section of the order form.

“This is the perfect companion piece to Matt Cardin’s fiction omnibus To Rouse Leviathan.” —Jon Padgett, author of The Secret of Ventriloquism

“For my money, Matt Cardin is the most interesting voice in horror criticism of our time.” —Nathan Ballingrud, author of North American Lake Monsters

For more than two decades, Matt Cardin has been one of the most profound and provocative critics and scholars working in the field of horror fiction, and this volume contains his collected essays on a wide array of topics within the genre.

Cardin has made a specialty in treating the multifaceted work of Thomas Ligotti, and in six substantial papers he discusses such subjects as H. P. Lovecraft’s influence on Ligotti’s work and thought, the nature of horror in such celebrated tales as “Nethescurial” and “The Bungalow House,” and other phases of the work of this master of the weird. And in a wide array of interviews, Cardin provides insight into his own vision and outlook, which have served as the basis of his weird tales.

But Cardin is best known as a critic who has brought a formidable knowledge of philosophy and religion to the analysis of horror fiction. Angels and demons; religion and vampires; the nature of cosmic horror—these and other topics are treated by Cardin in the context of horror fiction and film ranging from Mary Shelley’s Frankenstein to George Romero’s “Living Dead” films. In these and other papers, Matt Cardin displays his effortless mastery of the many complex issues evoked by the very nature of the weird tale.

The Masters’ Eyes, Shining with Secrets: The Influence of H. P. Lovecraft on Thomas Ligotti

A Formless Shade of Divinity: Chasing Down the Demiurge in Thomas Ligotti’s “The Red Tower,” I Have a Special Plan for This World, and This Degenerate Little Town

Foreword to Beneath the Surface by Simon Strantzas

Introduction to The Secret of Ventriloquism by Jon Padgett

Of Masks and Mystagogues: Introduction to Born to Fear: Interviews with Thomas Ligotti

Introduction to Portraits of Ruin by Joseph S. Pulver, Sr.

A Brief History of the Angel and the Demon

Those Sorrows Which Are Sent to Wean Us from the Earth: The Failed Quest for Enlightenment in Mary Shelley's Frankenstein

Gods and Monsters, Worms and Fire: A Horrific Reading of Isaiah

Scratches on the Universe’s Utmost Rim

Matt Cardin: Life and Mind of a Teeming Brain, by Rafael Tages

Shadows in the Corner of His Transcendental Eye: A Conversation with Matt Cardin, by Jon Padgett